The backdrop for "Venetian Estates News" at the top of this Blog is a view down Lake Venice from the only vacant lot left in VE! However, it won't be vacant much longer. I am representing the buyers in the purchase of the lot and we are scheduled to close this week. Preliminary sketches have already been done and a beautiful one story home is planned for the site.

For more info on this fabulous subdivision give me a call.

What's new (besides the year)?

Here in VE there are many new faces! Meet your new neighbors:

Eileen Westbrook at 819 Piedmont
Eileen lived on Tuscany for several years so she already has many friends in the neighborhood. She sold the home on Tuscany two years ago in order to downsize with a home in Belknap-Brookside. When she decided to begin looking for a new house a few months ago, I showed Eileen homes in Sugar Creek and other areas but there is just “no place like home (VE)”, so she purchased the beautifully remodeled home on Piedmont that I had listed. Her friends are so glad she has decided to remain in the neighborhood! Eileen is a benefits consultant with Benefits Unlimited, a division of Gallagher Benefit Services, Inc. located in Sugar Land.

Alice and Tim Jenney at 906 Gondola.
Alice and Tim relocated to Fort Bend County from Virginia Beach in 2006. They purchased a home in Sienna, where they have lived prior to moving to VE (this week!). Dr. Alice Jenney teaches education-major undergrads at Houston Community College. She is also a professor at the University of Houston, where she teaches graduate students holding their administrative endorsement and seeking their superintendent’s endorsement. Dr. Timothy Jenney has been the FBISD superintendent since September of 2006. Tim enjoys woodworking as a hobby, and Alice is a marathon runner. She runs several marathons each year, including the Boston Marathon in April. If you are out early–say between 3:30 and 4 AM– you might see her as she trains! Alice and Tim have four children (2 sons and 2 daughters) and nine grandchildren. They also have a Golden Retriever named Gator and a rescue dog, Sadie who is part Golden and part American Eskimo.

Quynh and Bao Vinh at 710 Santa Maria.
Quynh and Bao have been looking at homes in Venetian for over a year. Quynh is a New Product Manager with Great Southern Laboratories, a pharmaceutical company. She is also a licensed “part-time” real estate agent. Bao is an IT Project Consultant at Chevron Pipeline. They are very excited about their baby girl, to be born in March. Bao coached the “Houston Heat” dragon boat team for 4 years. He enjoys tennis, golf, chess and piano. Quynh and Bao are remodeling the home and hope to be in prior to the birth of their daughter.
Posted by Susan Friedman at 4:16 PM No comments: 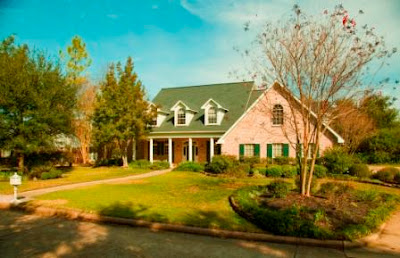 Posted by Susan Friedman at 8:47 PM No comments:

The brand new listing located at 907 Genova will be open Sunday, January 9 from 2 PM until 4 PM. This is a fabulous home with separate guest quarters located on Lake Eldridge. The list price is $769,000 and pictures will be up soon.
Posted by Susan Friedman at 10:23 AM No comments:

The annual meeting for Venetian Estates residents is being held next Wednesday, January 12, 7 PM in the Sugar Land Community Center.
Posted by Susan Friedman at 9:00 PM No comments:

As Bud and I begin 2011 and our 26th year of living in Venetian Estates I am more grateful than ever for this incredible neighborhood. Our daughters, Kristin and Kelly were three and four years old when we moved to 534 Lombardy Drive. They spent much of that month of December, 1984 learning to ride their bicycles down the street and over the bridge. In those years few young children lived in VE. Most of their playmates lived in Pecan Grove or Sugar Mill. Our daughter, Katie was born in 1986. By 1994 we needed a larger home and purchased our present home on Santa Maria. (It never ever occured to us to move out of the neighborhood!) We have such fond memories of those early years in VE.... birthday parties for the girls with everyone jumping in the lake when it got too hot... Fourth of July parades and fishing tournaments.... Our girls loved to fish! Paddle boat rides and dogs (and cats) floating on rafts in the lake..... buried treasure.... canoe races.....and the best part of all is that we will continue to "make more memories" each year. We have two daughters, two sons-in-law and four grandchildren now living in VE!

As a Realtor AND as a resident I would love for you to experience the VE lifestyle. Call or email me for a tour of the neighborhood. (I have a great new listing that will be ready for viewing next week!)