Three VE homes are scheduled to close in December! Sales in Venetian Estates started out slow this year but it looks like things are picking up. Turnover has always been minimal in Venetian - simply because once you live here you really don't want to live anywhere else! For more information on sales, or this incredible neighborhood contact me. 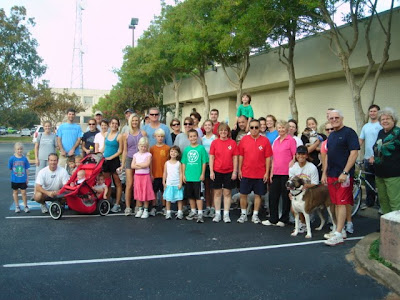 Thanks to Catherine Bell for organizing the First Annual VE Turkey Trot. Here are some
of the neighbors who participated. Everyone had a great time and VE raised approximately $450 for Second Mile Mission Center.
Posted by Susan Friedman at 6:15 PM No comments:

Meet at the Frost Bank parking lot on Thanksgiving morning at 8 am to walk our neighborhood circle together!

We will be taking donations for Second Mile Mission Center, a faith-based outreach for people in need, providing free food, clothing, household items, counseling, referral services, medical and dental care to Fort Bend County residents living in poverty. Suggested donations are $10 per family. Come join the fun! We hope to see you there!

Posted by Susan Friedman at 4:19 PM No comments:

No, not for football--we’re well into football season. No, not for the holidays--who is ever ready for the holidays? Are you ready for...new neighbors?! There are now three pending sales in the neighborhood and I happen to know there is a high level of interest in three other properties presently on the market!

So what’s up? Not interest rates. They have been extremely low for a while, but perhaps prospective buyers have begun to think they should take advantage of these rates just in case they start to rise. Lawrence Yun, NAR (National Association of Realtors®) chief economist, said the housing market is in the early stages of recovery: “A housing recovery is taking place but will be choppy at times depending on the duration and impact of a foreclosure moratorium. But the overall direction should be a gradual rising trend in home sales with buyers responding to historically low mortgage interest rates and very favorable affordability conditions.”

As I write this the home at 819 Piedmont is still available, and the price has been reduced to $335,000! If you have not seen this home call me. We’ve had comments from Realtors such as “WOW, If I could have a crush on a home this would be it!” and “Who did the design and who was the contractor?” “This home is beautiful!” See pictures on FBRE’s Facebook page. Also, “LIKE” FBRE’s page and you will have access to some great area real estate info. For real estate and other news particular to VE visit VenetianEstatesNews.com.

If you would like to walk on Monday and Wednesday evenings at 6 just show up in the Frost Bank (FBRE) parking lot. Several people are participating on a regular basis and it’s been a great way to have a 30-45 minute visit with a neighbor or two while getting some exercise. Next week we’ll be walking in the dark at 6 PM so bring a light or wear neon clothing. Remember to set your clocks back on Saturday evening, November 6th..

On October 30th three VE residents, Kate and Kenny Johnston and Luke Ferguson, ages 3, 2 and 1, respectively, were the City of Sugar Land’s first-place winners in the Town Square costume contest for their age group. The contest took place on a runway stage in front of City Hall. Kate, Kenny and Luke were in original costumes depicting “Three Blind Mice”. Congratulations to the “cousins” and to their Moms and Dads who were able to get them dressed in all the garb and convince them to keep it on long enough to parade down the runway in front of the judges. (By the way, the “Three Blind Mice” are three of my adorable grandchildren!) Unfortunately, my grand- dog, Birdie, who competed in the pet costume contest, did not place. She was adorable in her fluffy white cockatoo outfit, but the MC mistook her for a chicken. When he announced her as such, it’s no wonder she became flustered and did not do her best in the runway competition! Too bad the judges couldn’t see through this one!
Posted by Susan Friedman at 9:16 PM No comments:

The home at 907 Gondola closed yesterday and soon we will be welcoming our new neighbors, Tony and Jeana Johnson. Tony and Jeana will not be moving in immediately but hopefully they will be able to participate in the "VE Turkey Trot" and attend our annual Christmas party.
Posted by Susan Friedman at 11:19 AM No comments:

One of our Venetian Estates neighbors had a great idea. A Turkey Trot around the neighborhood! The "trot" will take place on Thanksgiving morning beginning at 8 AM. Neighobors will meet in the FBRE parking lot (Frost Bank). A suggested donation of $10 per family will be given to benefit Second Mile Mission Center. More details on this later.
Posted by Susan Friedman at 11:44 AM No comments:

What fun everyone had at the annual Venetian Estates Hayride! Many thanks to Jenn and Josh

LaRocca (Mr. and Mrs. America) and to Vicki Vaughn for organizing the event.

Also thanks to the neighbors on Bel Mar, Salerno, Tuscany and San Marino (designated hayride streets this year) for being so generous with your candy and smiles! I know at least one neighbor also gave out wine and beer to the Moms and Dads on the hayride. That was probably a welcome "treat" to tired parents of the younger ones!

Posted by Susan Friedman at 4:00 PM No comments:

http://www.imperialperformingarts.org/
Posted by Susan Friedman at 5:15 PM No comments: